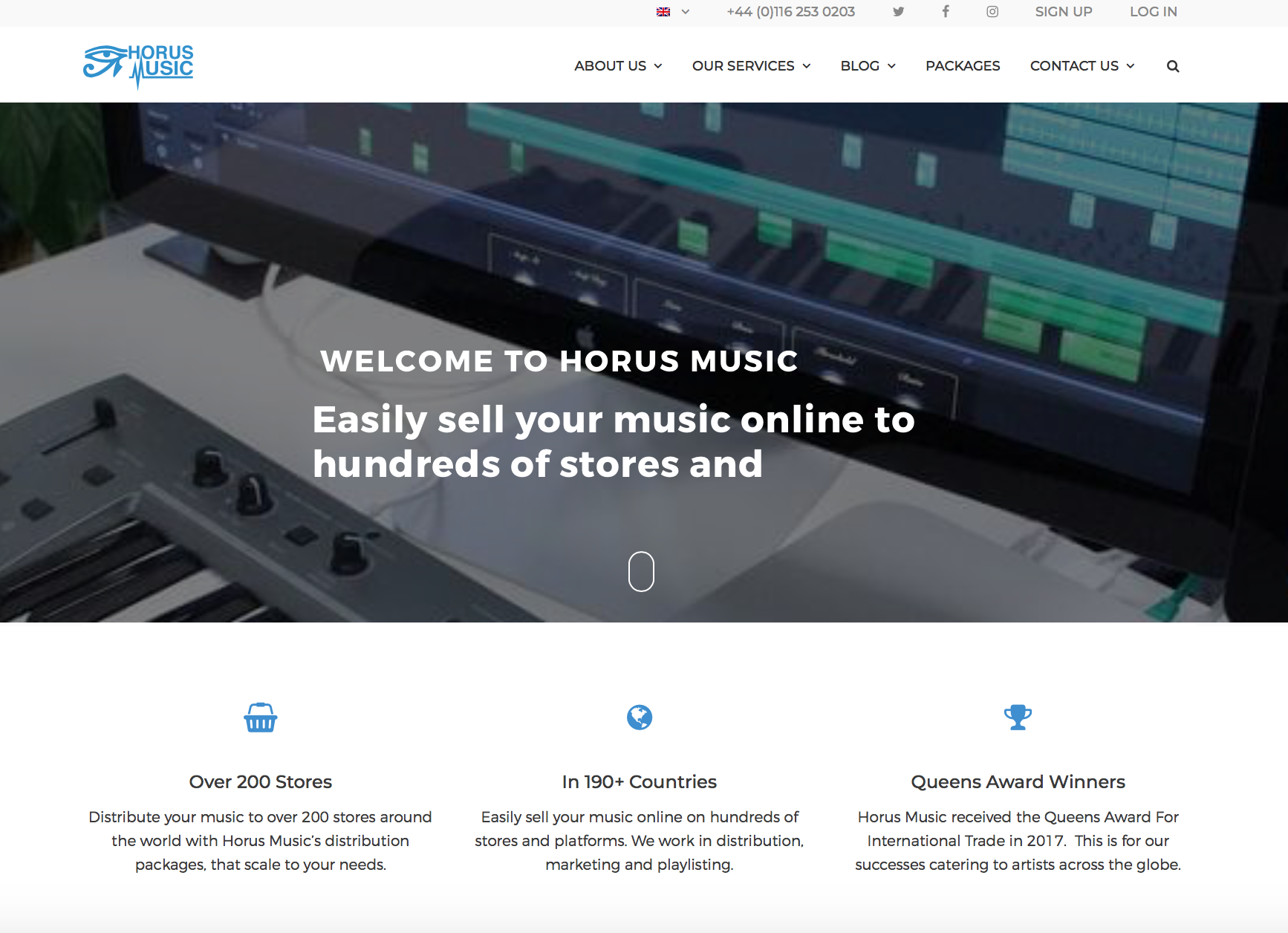 My team and I decided we would also take this opportunity to improve the SEO. It was important that the existing website remained live while the new one was in development. This meant a new approach was needed (including hosting the new website locally while we designed it).

This project was handled largely by me working on my own with assistance from colleagues in graphic design and system administration.

With 2016 being Horus Music’s 10th anniversary, the company was keen to update the look of both the logo (which was modified earlier in the year) and the website. It was decided that both of these should reflect how far the company has come in the last 10 years while also remaining true to the brand as well as the needs of clients.

The way they have recently expanded as a business also meant the need for more localised websites. With this in mind, we started work on www.horusmusic.global which would serve as the global website and would target a variety of countries. This would be the top level domain.

We used MAMP software to create a local server on my computer and installed WordPress which we’d be using as the CMS. We then took the time to design each area of the site as needed. It was important to make sure the website was serving it’s purpose.

The company has had a website for 10 years and so there was plenty of content which needed updating and 301 redirects were implemented as necessary.

Once the global website was complete, we started work on www.horusmusic.in which would target the Indian market. Horus Music had already opened an office in Mumbai at this point. It was important that this website was comprised of localised information and that services were tailored to suit. 301 redirects were implemented as needed for the Indian content.

The next step was the www.horusmusic.co.uk website. This was the website that Horus Music had been using for the last 10 years. Instead of updating this website gradually as we had with the others, it was decided that we should update the UK site all at once to reduce disruption and to aid in a smooth transition.

Additionally, throughout the year our developers had been working on a new client zone that would be used by our distribution clients – this would be known as MyClientZone. All websites and MyClientZone would be working independently, but still needed to integrate with the products we were offering. We needed a new e-Commerce solution until a long-term solution could be built within My Client Zone further down the line. Woo Commerce was chosen and was installed on all 3 websites.

We were then informed that we needed another website which would sell MyClientZone as a distribution software solution to other distribution companies. This would be a white label solution and became accessible through www.myclientzone.com.

It was also during this time that our websites were updated from http to https to make them a more secure connection.

All of the above was completed by March 2017, but we were not done yet.

With the separate websites above, we were spreading out website authority across several domains and it was not working for us.

We needed to bring the UK, Indian and Custom Music Tools websites within the one Global location. This meant the site had to be updated again to reflect the needs of all companies and to update the content accordingly. We looked at our technical analysis again and also began to implement the necessary 301 redirects – remembering to eliminate previous redirects as not to negatively impact our SEO.

After this was complete, we were able to stop the servers on the original websites (we were now using a hetzner server).

Finally, so that search engines could understand which language we were using on a specific page, and so that they can serve the correct language to the correct user we used hreflang tags.

We ‘translated’ our English content into Hindi for India – although we were told to keep the content in English and localise the information as this is what users would expect in this country.

We then worked on translating into Korean as this would be the next country we would be targeting.

(Note: I set up the process for Korean hreflang tags and added translations for the main content, but I left Horus Music before all of the translations were obtained and so the rest was handed off to one of my colleagues.)

With this we now had websites which were fully modernised, and were localised to target the companies most important territories. Building and expanding from here would be much smoother and more efficient.

These are the final websites that were created as a result of this process:

The bounce rate of the global website was reduced to less than 15% as a result of our efforts.

Additionally, with the combined websites, Horus Music now enjoyed over 10,000 sessions each month, and this number was growing. In January 2016, 2,160 sessions was considered a good month. This is an increase of 510%.

What is Natural Language Processing and Search?

Why We Should All Be Mining the SERPs